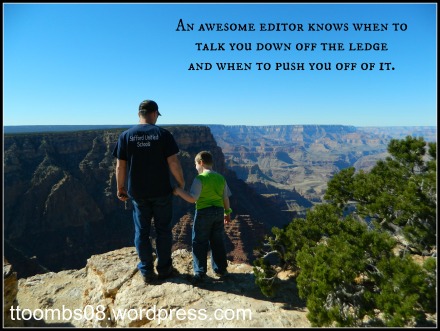 This week has been a whirlwind, but then again, what week isn’t? If you have a kid, a pet, a partner, or a life, I think you know what I’m talking about. There’s always someone or something whining for your attention.

And if that weren’t bad enough, I had a couple of days filled with paralyzing fear. Not the “I can’t leave the house” kind (although, I have experienced that once or twice before). Nope, this was the “My writing sucks. My characters REALLY suck because they’re talking to me but I’m not understanding them. I give up. I’ll never be any good. I wonder if McDonald’s is hiring.”

This particular episode of writer angst was brought on by none other than my beloved editor, Sandra. She wasn’t so loved while I was wallowing in self-doubt. She had stated in her edit of chapter four, “I just want YOU, the author, to consider what you really want for these characters, their early and later relationships and how all that fits the overall plot… However, I am not sure YOU have these aspects really in mind and, if so, that you know how you plan to use them in the later plot.”

Then I read “Why You Should Hate Your Editor” and everything became crystal clear. I wasn’t really mad at her or hating on her. I was stuck, frustrated and lost. But once I sat my happy ass down (after my three day pity-party) and started to work through all of her comments, I realized she was 100% right on target. One of my main characters was all over the place and I hadn’t nailed him down yet. Her comments weren’t personal. And they weren’t meant to hurt me. She’s pushing me to write the best story I can.

Sandra has told me on several occasions, and usually after she’s read a chapter revision, that she knows that I can do it. “You just have to whip those Doubt Demons into shape occasionally along the path to authorship. Talent, ability and guts– yes, you DO have them!” She knows exactly when to push me to fly. And she knows exactly when to talk me off of the ledge. A good editor will do that.

Weekly Goal: Um…write something. I have to figure out which rocks to throw at one of my characters in chapter six.

Favorite Part of My WIP:

“I’m Devon Jaxx. I was lucky enough to have been arrested for drunk and disorderly about a week ago. Personally, I think it’s because I’m better looking than this rogue Prince Brian person.”

“Sounds like we’re both burned. What do people call you?”

“You mean besides ‘asshole?’ Adam Whitley. I was picked up for being one of the good guys. But it was all a mistake. I’m perfectly innocent and far from being a good guy.”

Weekly Cool Writing Site: Upgrade Your Story – Lots and lots of advice from a professional editor and author coach. She also features interviews with authors.

Quote of the week: 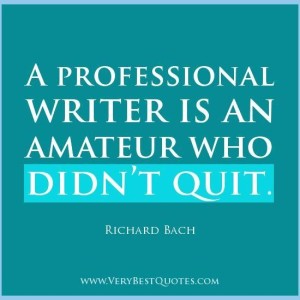 What I’m Reading: Still reading “Island in the Sea of Time.” It’s a HUGE book, ok?! Over 600 pages. At least I’m halfway through it. And it’s GOOD. I’ve been toying with the idea of doing book reviews, so don’t be surprised if they start to pop up here on the blog.

Conclusion: This week has been an emotional roller coaster, writing wise. But that’s to be expected. If writing was easy, everyone would be doing it, right?

Attack of the Hazacks: An Erebus Rangers Short Story